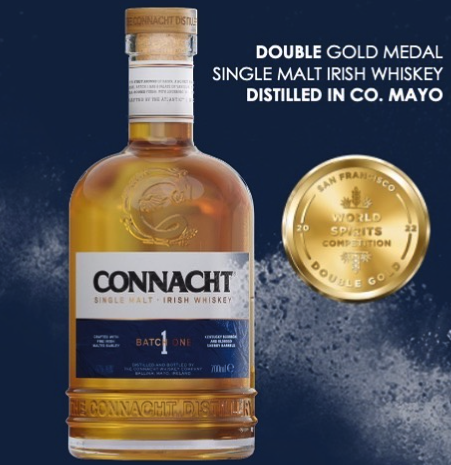 The Connacht Distillery has been awarded a coveted Double Gold medal for Batch 1 of its Connacht Single Malt Irish Whiskey at this year’s San Francisco World Spirits Competition. This major recognition of the distillery’s first core Single Malt release from one of the world’s leading industry competitions represents a massive achievement for the distilling team and a significant milestone less than a year after the launch of the whiskey in autumn 2021.

The San Francisco World Spirits Competition is one of the world’s most prestigious spirits competitions and is considered one of the most important endorsements by the global spirits industry. The Single Malt Irish Whiskey was awarded the Double Gold medal after it achieved a gold medal rating from all members of the judging panel following a blind tasting by the group of industry experts. Winners of the Double Gold medal are considered among the finest products in the world.

The Connacht Distillery’s Single Malt Irish Whiskey is the first whiskey to be distilled in Co. Mayo in over 150 years. Crafted using 100% Irish malt barley, aged in ex-bourbon casks for four years and finished in ex-Oloroso sherry casks, it is then double distilled from the distillery’s own copper pot stills.

Celebrating the win, Killian O’Sullivan, The Connacht Distillery’s Commercial Director said: “We are absolutely thrilled to be awarded the Double Gold medal at the San Francisco World Spirits Competition. For our first Single Malt whiskey to receive this accolade less than a year since its launch is testament to the outstanding work of our team over a number of years. I would like to congratulate the entire team for creating a world class liquid that whiskey lovers the world over can enjoy. The future is bright for the Connacht Distillery and this award is a strong sign of things to come”.

Please wait while you are redirected to the shop page for your location...